Presented by The Davis McCullough Foundation

HALIFAX, Massachusetts – August 21, 2017 – Twenty-five entries took to the field on Sunday afternoon to contest the $75,000 Agero Grand Prix on the final day of the Silver Oak Jumper Tournament. While several veteran pairs did their best to claim the victory, it was Devin Ryan and the aptly named Eddie Blue (Zirocco Blue VDL x Marlon) who continued a recent winning streak to take the top honors. Despite his relatively young age, Ryan has guided the eight-year-old gelding to the winner’s circle frequently this summer besting more seasoned competitors at top venues including the $100,000 I Love NY Grand Prix at Lake Placid in July; and the CSI3*-W 1.50m $45,000 Open Welcome Quebec Original at International Bromont, just a few weeks ago. 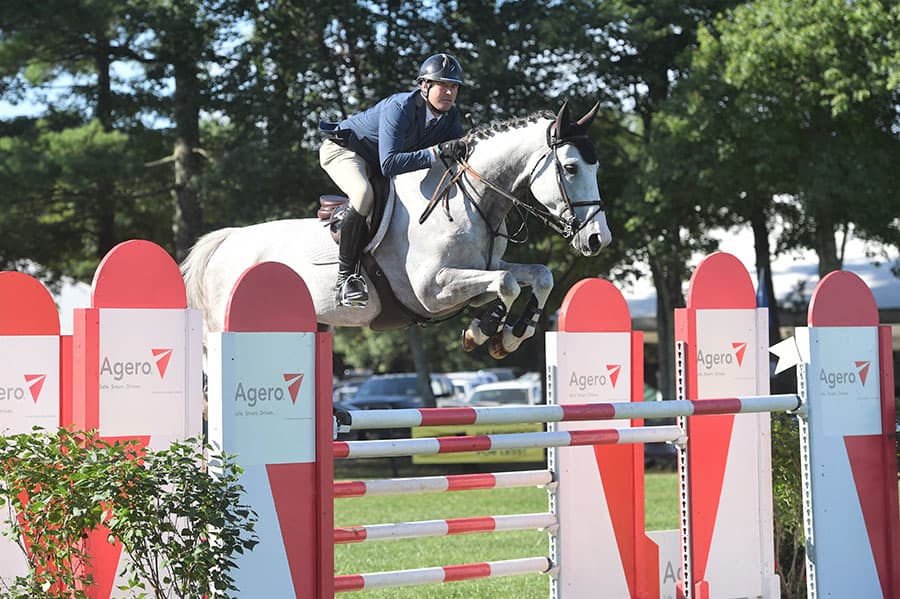 Devin Ryan, back for a second time riding at Silver Oak – found his 8-year-old horse, Eddie Blue’s big stride was perfectly suited to the questions in Olaf Petersen’s courses this week.

“Today, I said to myself before I entered the ring, think smooth and soft, don’t try and pull him around – let him follow my hand and I did that; and the jumps showed up,” said Ryan. “Eddie has a massive stride; I think I left out one stride in every line – more so than anyone else,” he added. “Galloping to the big jumps on a big field went to my advantage.”

Ryan found Eddie as a 4-year-old in Europe and bought him as a prospect, with owners Laurie and Steve Laraby from Double L Show Jumpers. “They bought him for me to develop and he has proved himself this season. He’s getting quicker off the ground – and improving in the jump offs. He’s gotten faster through the season. I’ve gotten better with him, getting him to know him more and more,” added Ryan.

Ryan described Eddie Blue as “the horse of the future – a special horse – he has demonstrated that he is every part of it, especially in today’s Grand Prix.”
Renown course designer Olaf Petersen Jr. returned to Silver Oak after a hiatus last year to attend the 2016 summer Olympics in Rio de Janerio, Brazil. In discussing Sunday’s Grand Prix track, Petersen described his philosophy for the week, “always in my courses, I like free, forward riding – always forward moving – like the nature of our sport.” His course plan would reward riders who asked their horses to gallop between fences. His goal was to test rideability of the horses who would be asked to jump an oxer – vertical – vertical combination, which he described as “a bit tricky because the riders are taught control and come back – but I want them to go forward.”

On designing courses for the Silver Oak grass field, Petersen concluded, “it’s a big field – we want the horse to gallop – don’t jump one and pull – rather, jump one and go – that’s really my philosophy of the sport.” 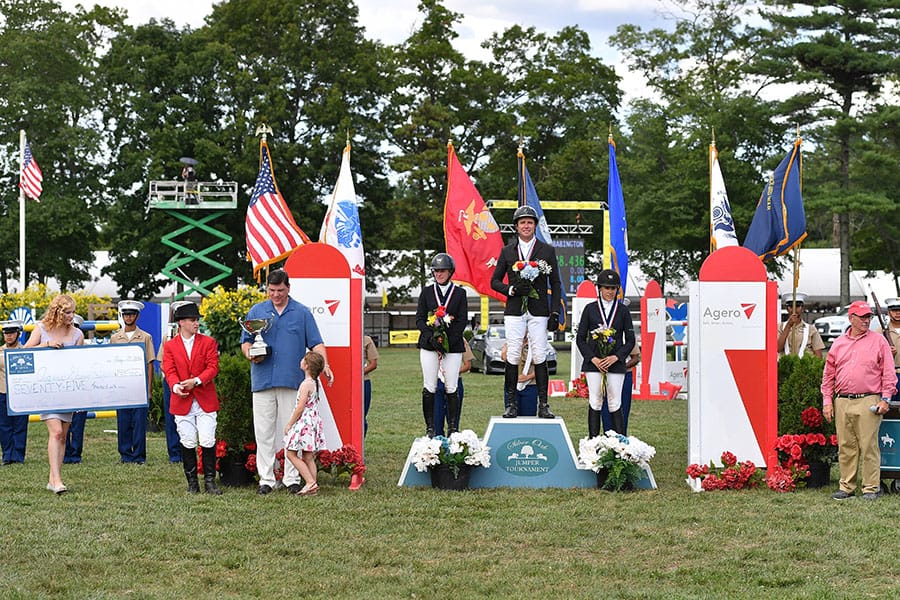 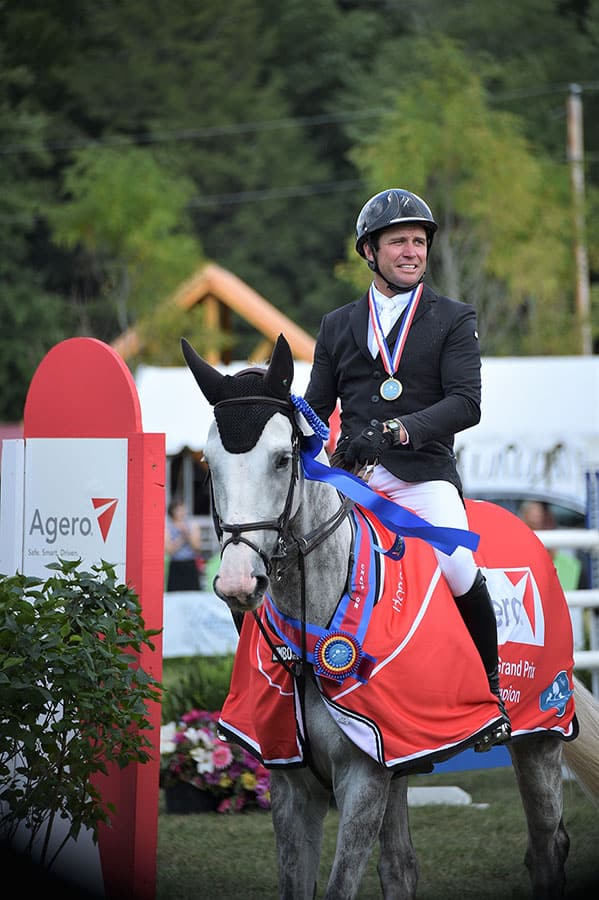 
Ryan thinks highly of Petersen as a great course designer and said, “There wasn’t one trap that got people, every jump came down once – which in my mind is a testament to good course design. If you want to jump on grass, come to Silver Oak.”

Grand Prix Highlights
In the first round of competition, Filip de Wandel and Jingo Didieu D’arras were trailblazers in the order of go and delivered a clear round, clocking in at 79.746, well under the time allowed of 80 seconds. Amber Harte was the second to go clear on Austria 2, the speedy Holsteiner mare crossed the timers at 77.195 earning a spot in the jump off and setting the time to beat. Brianne Goutal and her Nice de Prissey earned the third clear with a 79.182. Nine rounds later, Devin Ryan and Eddie Blue clocked around the course clean with a time of 79.493 to earn them a place in the jump off. Late in the class, Willie Tynan piloted KEC City Limits, who had earned 4th in the Welcome Stake earlier this week, to another clear round with a 78.145 on the clock. Last to go in the first round, defending champion Kevin Babington and Mark Q, put in the final clear to bring the jump off number to six.

Grand Prix Jump Off Highlights
With a time allowed of 60 seconds, Filip de Wandel and Jingo Didieu D’arras returned for the jump off and finished the short track in 53.109, but with an unfortunate rail. Next to return, Amber Harte and Austria 2 rode a forward 46.441 setting the time to beat. Shortly after Brianne Goutal and Nice De Prissey jumped a solid clear round in 46.995, Ryan and Eddie Blue delivered a forward paced, foot perfect effort and shot to first at 45.262. Both Mark Q and KEC City Limits had 8 faults each with times of 48.436 and 49.122 respectively to round out the top six placings.

Amber Harte, a first-time competitor at Silver Oak, rode the diminutive Austria 9 to a second-place finish in today’s Grand Prix. “She’s a naturally fast horse and is not scared by being prompt to the jumps,” said Harte. When asked about how the course rode, Harte replied, “I thought the track was fabulous – it was straightforward and nicely built, but it actually rode bigger than it walked.” Given her success with the Flying Shrimp (her barn name because she’s considered tiny), she was second in the Grand Prix at Lake Placid and has placed at FEI classes in Florida, Harte said, “she is starting to develop a fan club.” Her owners, Take the High Road LLC, have been wonderful to ride for, added Harte. “We will be sure to come back to Silver Oak next year, its been a great experience for us,” said Harte. 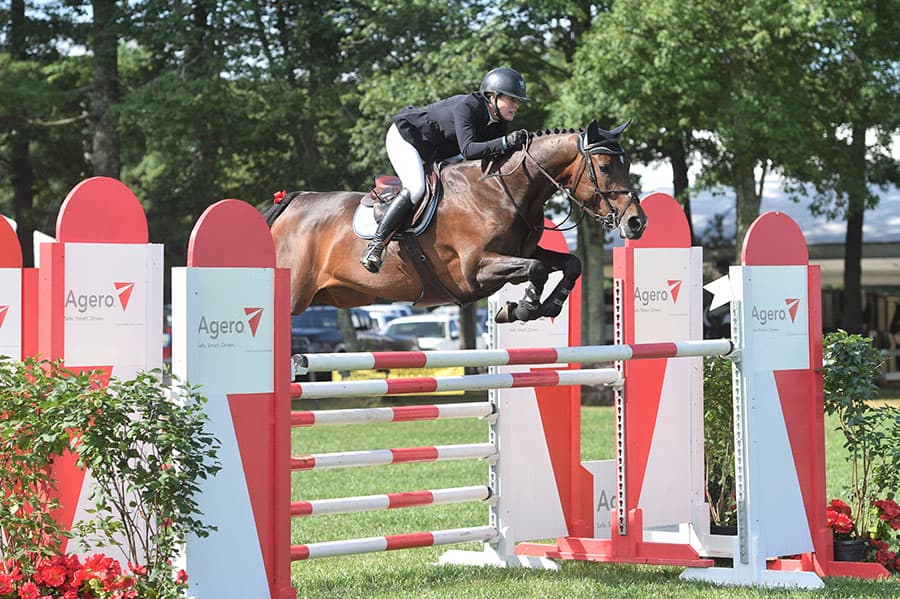 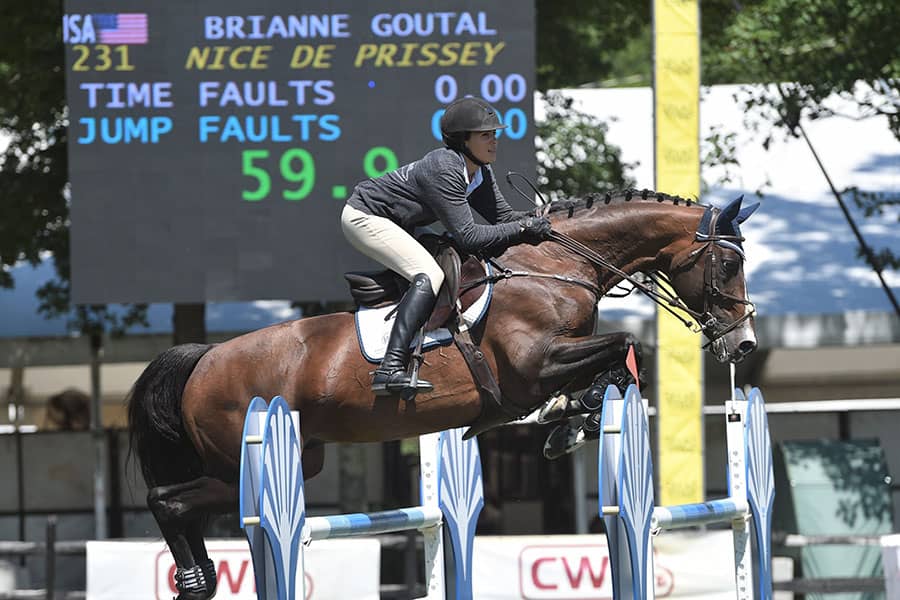 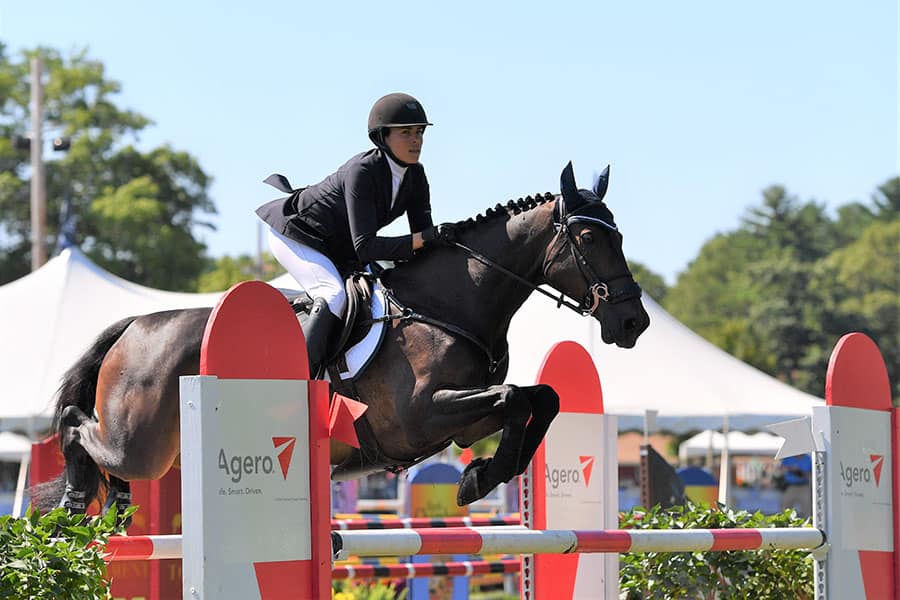 Brianne Goutal and Onira, an experienced pair with a long history together, rose to the top of the 51 horse field in the $15,000 D&G Ventures Mini Prix on the final day of competition at the Silver Oak Jumper Tournament. Now on her comeback tour after the birth of her daughter Clea seven months ago, Brianne speaks with obvious affection about the 1996 Dutch Warmblood gelding (Nimmerdor x G.Ramiro Z) with whom she has won many honors. “I bought him as a seven year old when I was a junior and we went up the ranks together – I did all my firsts with him including my first equitation final – he is 21 now.”

Now in a new phase of her career, Brianne spends about fifty percent of her time training, which she loves. “My first student was Sydney Shulman, she came to me as a working student and we worked together for about 5 years. I’m really grateful to her because she really started everything out for me and opened my eyes to the training part of things.”

Goutal was complimentary of the event which she has attended several times. “We look forward to coming to this horse show, it has one of the nicest atmospheres of any of the shows that we do all year. I find a lot of shows concentrate on the footing in the competition rings, but here they really succeed in the schooling areas. The GGT footing is awesome – they do such a good job preparing it. As riders we appreciate that because it sets up the horses for the competition ring. The grass too – we are losing that in the United States – there are only a few shows that have it – and it is nice to come here and be able to compete on such a nice grass field.”

As part of her win in the Mini Prix, Brianne was awarded the fabulous Scooter, donated by sponsor Herb Chambers. 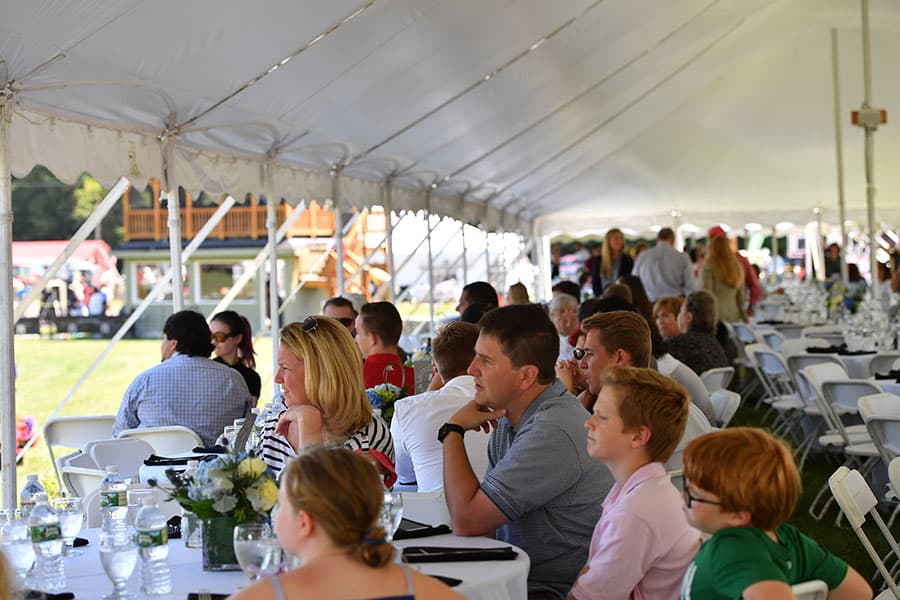 Silver Oak has become known for its elaborate halftime entertainment programs and this year was no exception. Spectators were awed by the elegant performance from the fabulous Sons of the Wind Lusitano horses.

The national anthem was performed by ‘The Singing Trooper’ – retired USMC Sgt. Daniel M. Clark who has represented the Commonwealth of Massachusetts at more than 2,500 Federal, State, Local, and Military functions during his 20-year career in the State Police. Clark has performed more than 26 foreign National Anthems for visiting dignitaries and international sporting events. 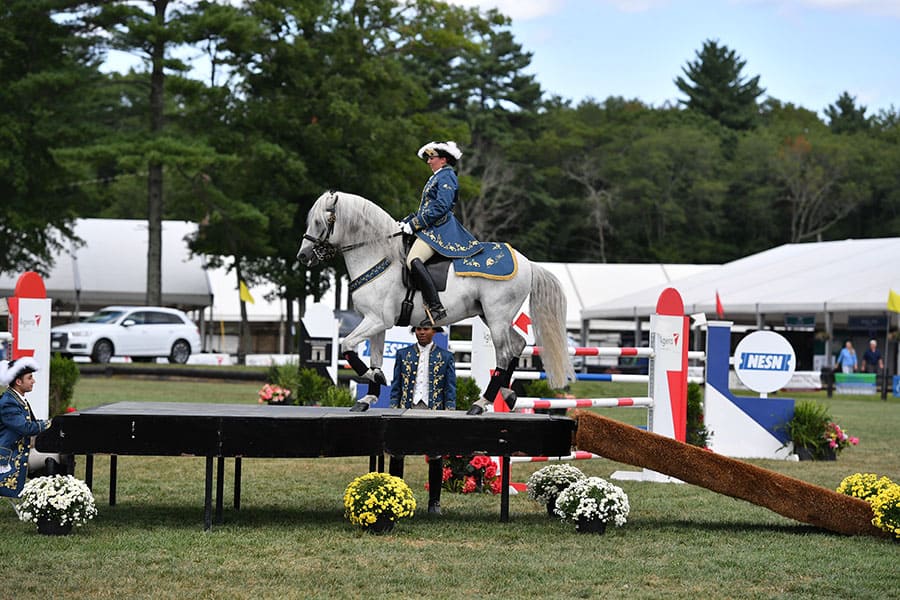 Sons of the Wind thrilled the crowd with their breathtaking Performanc

At his School for Equestrian Arts, Dressage Master and Portugal native, Vitor J. Silva shares his intuitive horsemanship and finely trained Lusitano schoolmasters with students who travel to the Sons of the Wind Farm from across the United States, and the world for an opportunity to expand their abilities in a progressive manner on equine schoolmasters, which perform to the Grand Prix level of dressage. 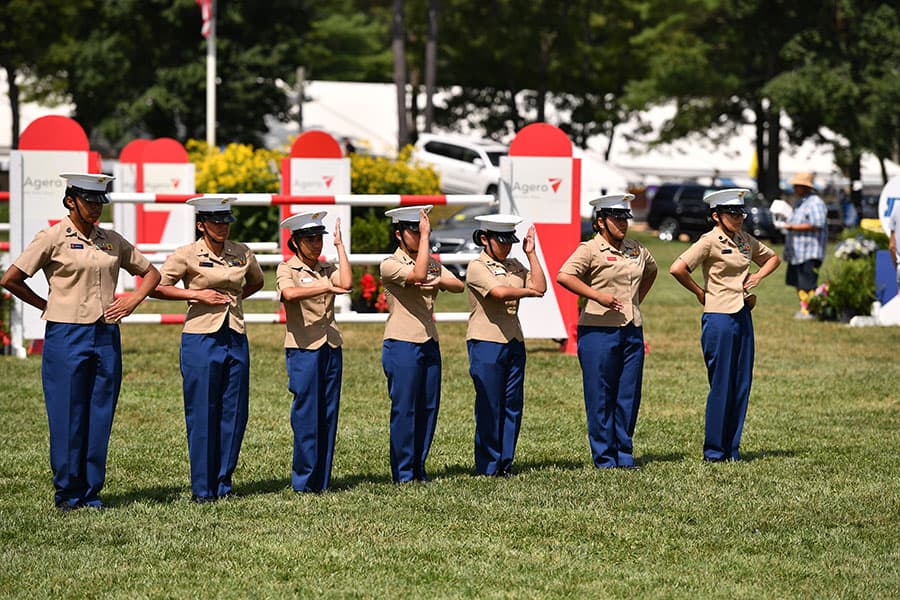 This year Silver Oak received approval from the Federal government and state of Massachusetts and is now recognized as a 501c3 federal charity.  Led by the incredible example of sponsor / partner Victoria McCullough to focus on animal rescue, this year’s charity recipients were Danny and Ron’s Rescue and the Omega Horse Rescue and Rehabilitation Center. 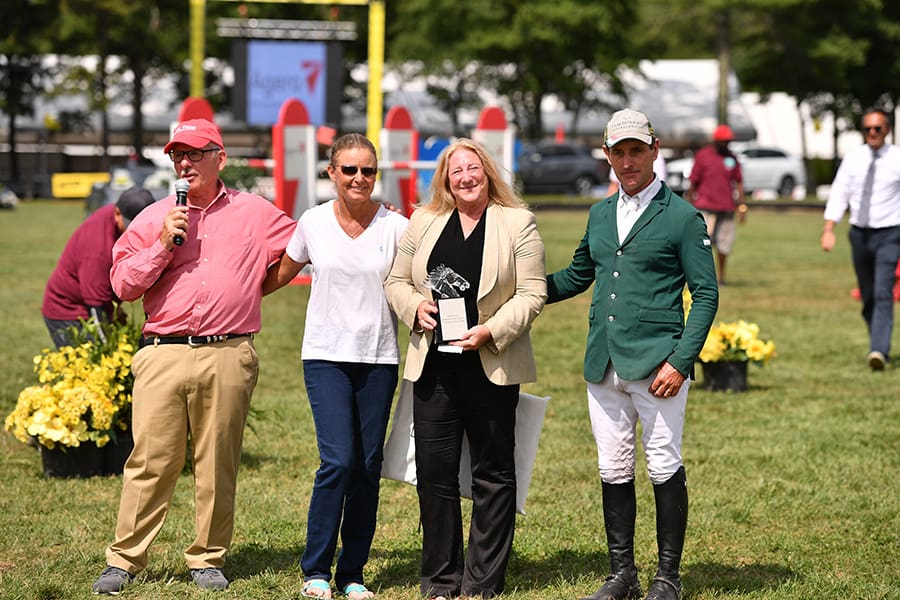 McCullough, of The Davis McCullough Foundation, addressed the crowd assembled for the horse show explaining that she hoped to “start a new trend” of giving today by presenting $10,000 checks to both charities. Proceeds from the silent auction of McLain Ward’s two historic championship coolers at the event raised an additional $4,000 for the Omega charity.

A longtime fan of Silver Oak, McCullough beamed “I love Silver Oak – five stars is not enough of a rating for this wonderful horse show.” In an emotional presentation, McCullough gave show Chairman Jeff Papows a painting of his beloved horse, Merlin. 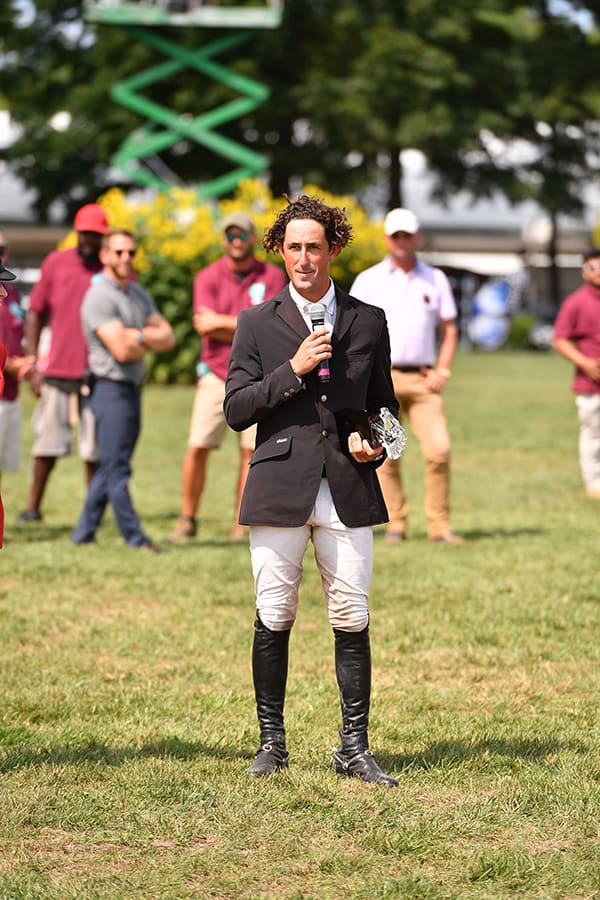 All photos are by the official show photographer: Andrew Ryback Photography and are available for purchase.