Blue skies, scores of entries and record attendance under the billowing white tents along with a young rider winning her first Grand Prix against a field of top riders – it was a fitting way to end a stunning week of top show jumping sport at the 2016 Silver Oak Jumper Tournament.

Thirty four horses and riders representing six countries came out for the $75,000 Agero Grand Prix on Sunday afternoon.  Alan Wade’s course featured 15 jumping efforts and a time allowed of 84 seconds.  The flowing course was a crowd pleaser from start to finish with a dramatic triple combination arranged alongside the VIP tent. It was ultimately newcomer Callie Smith and her Attention Et Z who bested an international field of Olympians and showjumping who’s who to take the win. 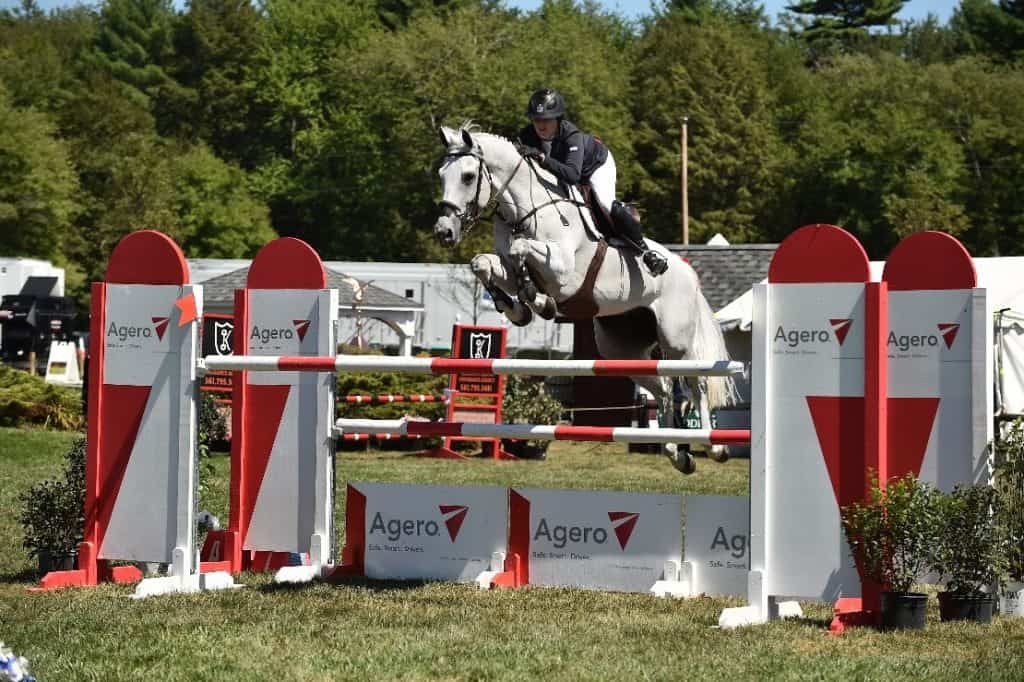 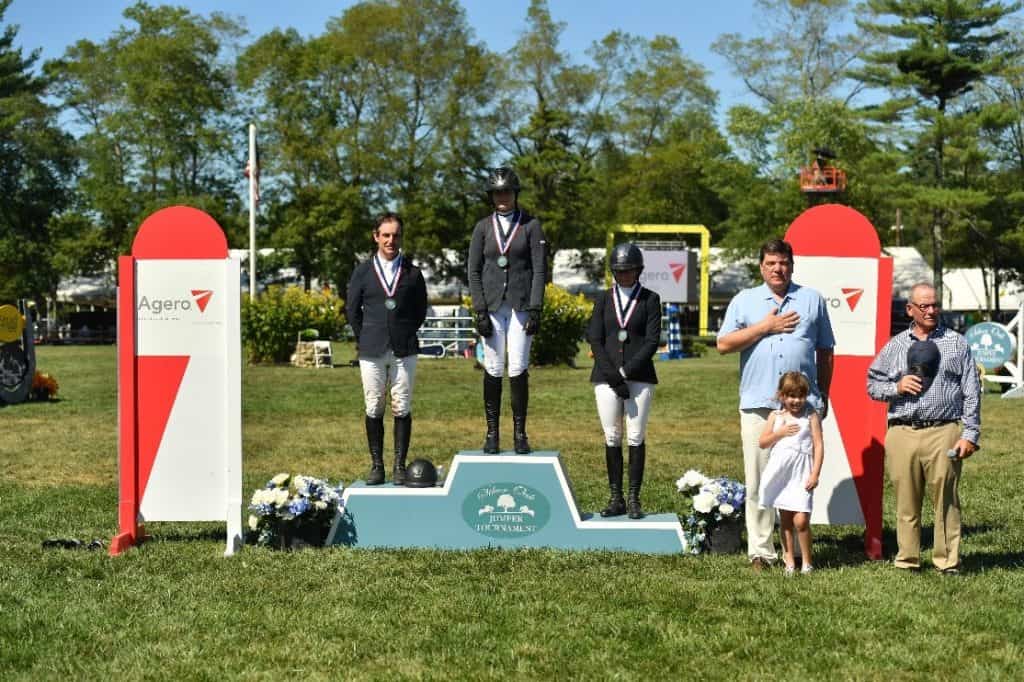 Kevin Babington confirmed that the course “rode harder than it walked” and many riders seemed to have trouble finding an early rhythm to the first and second fences. The final fence, a wide oxer, proved to be a heartbreaker for Edward Levy and Fineman, Debbie Dolan and Dakota, Chloe Field and Coriano Zwartepannehof and Kevin McCarthy and Analyze This as the four pairs posted beautiful clear rounds until coming to grief by dropping one of its brightly colored rails.  Richie Moloney and Button Sitte laid down a flawless clear trip over the jumps, but a 4 tenths of a second time fault kept him out of the jump off.

Eliza Lehrmann and Isaac 22 provided the first clear after 11 horses with a time of 83.026. Just a few trips later, Callie M. Smith and Attention Et Z made efficient use of the course to ensure there would be a jump off by coming though the timers clear at 80.930.  Ireland’s Kevin Babington and Double O Seven 7 delivered a steady 82.968 to earn the third spot in jump off.  Six trips later Tara Corr and Boy Blue turned in another clear with a time of 83.745. With two to go Colin Syquia and Adventure E delivered a foot perfect round at a time of 83.277 to be the fourth rider qualified for the jump off.  You could hear a pin drop as Kevin Babington guided Super Chilled to another clear round and a tie of 81.737.

The short course featured six efforts and a time allowed of 54 seconds. Eliza Lehrmann and Isaac 22 were first out on to the field and went clear with a time of 54.003. Tara L. Corr and Boy Blue went clear and posted a time of 47.763.Callie M. Smith and Attention Et Z proved unbeatable as their 45.596 time proved impossible for the field to catch. Kevin Babington and Double O Seven 7 came closest to the time, but had an unlucky rail dropping them to fourth. Colin Syquia and Adventure E had an unlucky rail at the second blue and white NESN fence, but finished strong with a 48.536.

Smith described how in the first round, “My horse is a great teacher and he saved me a couple times when I wanted to do 7 strides in the first two lines but we ended up doing it in 8. It’s been a great journey with him this year,” she said, after moving him up to jump higher fences at both Lake Placid and Devon.  Since he felt so good in those events, coming into this Grand Prix, “we decided to give it a try.”

“Everything rode really nice, it was a welcoming course and nothing meant to trick you.  My horse jumped really well. Smith’s strategy going into the jump off was to ride well and be double clear and not try and rush him.  “He is very sensitive – so getting him to go as fast as he can go smooth was our plan.”

Asked about the pressure of competing with her trainer and fellow competitor Paul O’Shea watching on Smith said he gave her pointers and is a great trainer.  “Going up against the veteran riders like Kevin Babington was a thrill, in the first round he got me by 3 seconds.”

Her plans for competing this fall are the American Gold Cup and HITS in Saugerties.
As to competing at next year’s Silver Oak Jumper Tournament, “We will definitely be here, it’s an exceptional show and I really enjoy riding here.” 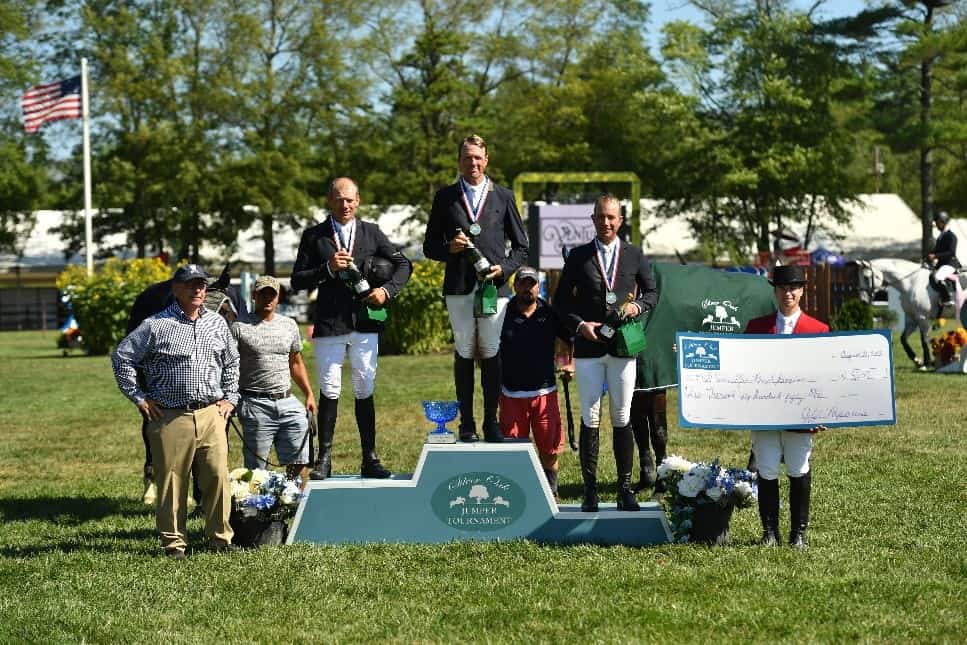 An unprecedented number of entries made an early start necessary for the DG Ventures Mini Prix. A total of 49 horse and rider combinations tackled Alan Wade’s 1.35m track without producing a clear round until sixth-to-go Charlie Jacobs and Cassinja S came in clear and under the time at 67.157. The pair went on to produce a jump off score of 39.007.

It took almost 20 rounds to get another clear trip on the scoreboard as Peter Wylde and Shakira Z jumped clear with a time of 67.361. The duo then scored a jump off time of 37.350, well under the time allowed of 52 seconds, and proving unattainable for the rest of the field giving them the win.

Despite Filip De Wandel’s best efforts with Innocent Nina, he could not catch Shakira Z and had to settle for second place. 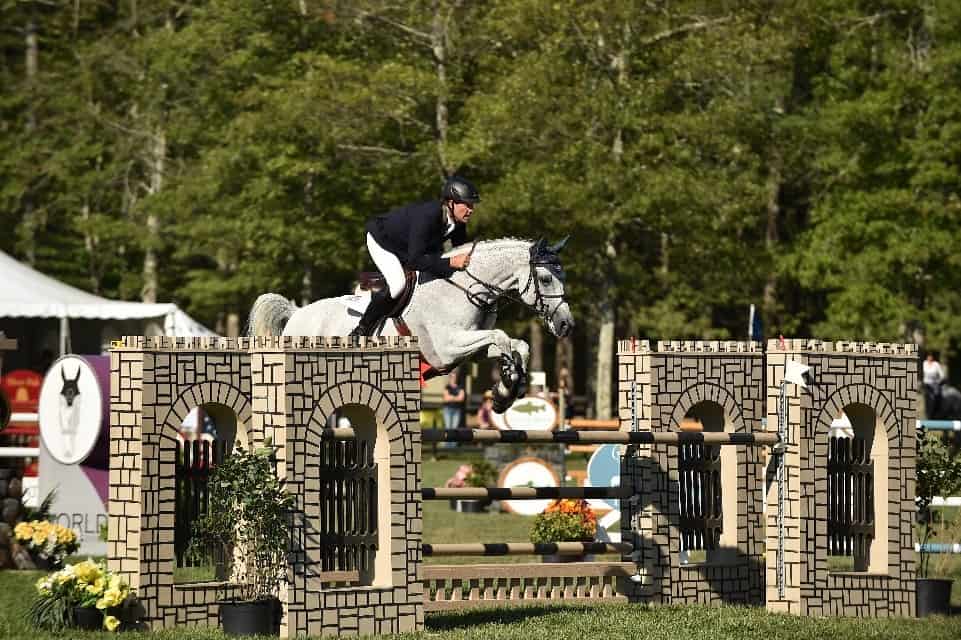 After a third place finish in Thursday’s Welcome Stake, Wylde was clearly thrilled with the mare’s result,  “Shakira is really in form now, she had a fantastic result two weeks ago at HITS in Saugerties and she’s been great here – she’s just so on right now, she’s fit, she feels great, she’s confident. When she jumped the first round, it felt the easiest round I’ve had with her for the year and yet it was a very difficult course and the time was really tight and she just did it so easily so I knew I had a chance with her.”

She’ s been knocking on the door to win a big class so when I went to do the jump off I said to myself  ‘OK, I’m going to really try my hardest to be competitive.’  And she did everything I asked of her.  That’s how you win classes like this is the horse has to be in good form and everything has to be lined up and it is with her, I’m super excited to go forward to the Hampton Classic after being first and third in her two big classes her it just a great result and I’m really happy.

Golf 96 Retirement Ceremony
It was difficult to hold back the tears during an emotional ceremony for Golf 96, a great horse who at 20, won his last class with Danielle Stacy before his well deserved retirement. 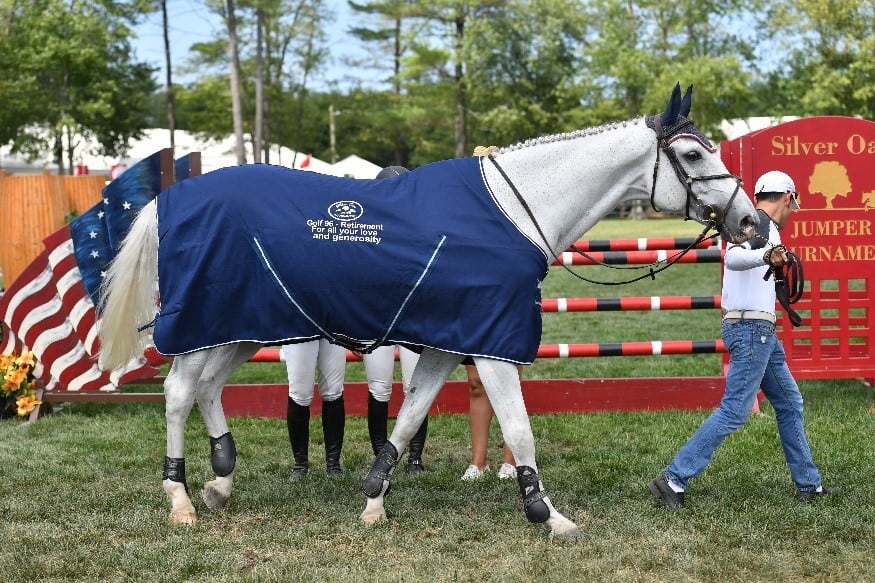 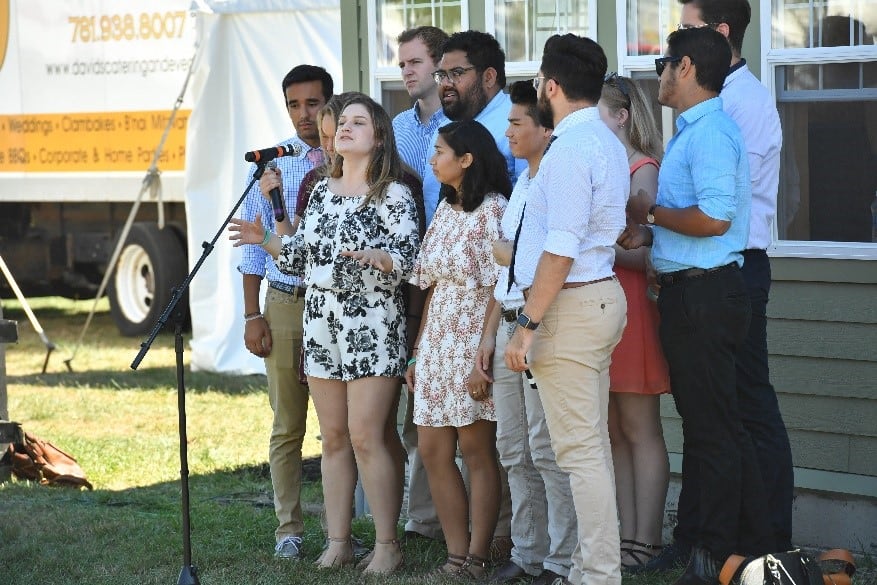 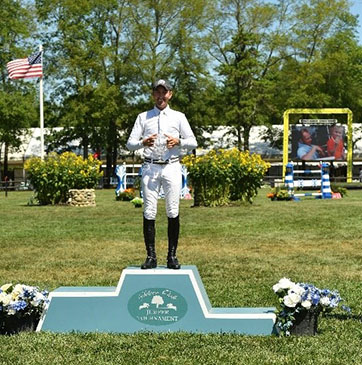 The first annual Style of Riding Award was awarded to Jonathan Corrigan and given in memory of legendary horseman, Harry Gill 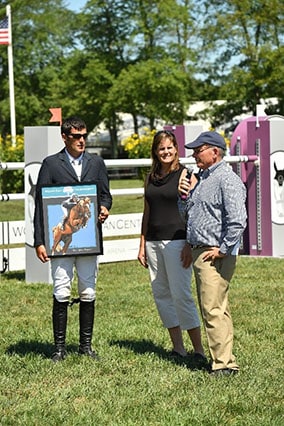 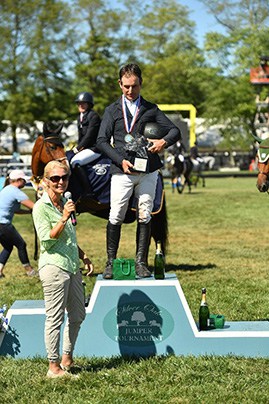 Dianna Babington gets emotional in speaking about Carling King. Kevin explained that King must be looking down as his nephew carried Kevin to a great result in today’s Grand Prix. 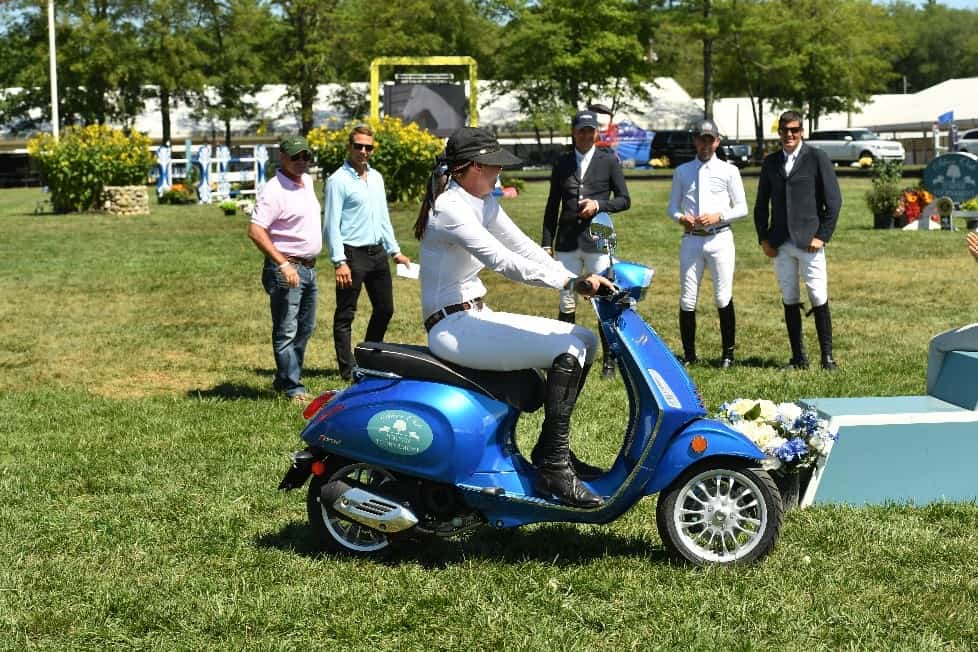 Division Champions were given a mystery key for the Scooter Give Away. Winner Adrienne Iverson Zooms Off! 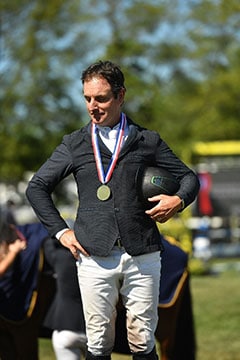