Ireland’s Alan Wade will be the Featured Course Designer

With the 2015 edition of The Silver Oak Jumper Tournament (SOJT) in the books as the biggest success to date, preparations are well underway for the new year’s 2016 effort. The dates for next summer are August 17 – 21, 2016 at Fieldstone Show Park in Halifax, Massachusetts.

Remaining true to its mission statement as “the rider’s horse show,” our first priority was to secure the best course designer in the world to take over for Olaf Petersen, Jr. who is committed to doing the courses for the 2016 Olympiad. That man is none other than Ireland’s Alan Wade.

Alan Wade is an FEI-Level 4 Course Designer from Tipperary, Ireland, and the son of Tommy Wade, former Irish international rider of considerable fame. In addition, Alan was Chef Déquipe of Ireland during which they won the European Team Gold Medal, as well as over 30 Nations Cup competitions worldwide. 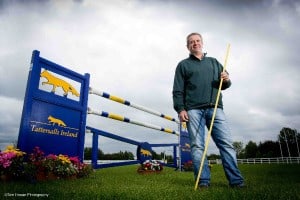 Alan has been course designing since the age of twelve, and has been chosen to course design at some of the world’s most important shows, including Dublin CSIO in Ireland, but also The American Gold Cup -Old Salem, USEF National.

“We are very lucky to have Alan. I polled many of our top riders and everyone recommended Alan as the first choice,” said Jeff Papows, Silver Oak’s founder and CEO. “I’ve said many times that there are three critical elements to begin the planning of a world class Jumper Show: the quality of the course designers, the quality of the jumping surfaces, and the intelligence of the schedules and classes offered.”

Please remember The SOJT sold out early in 2015 and turned away more than one hundred entries. We did this to ensure relaxed schedules, the integrity of the beautiful Unicorn Landing Farm Grand Prix field, and to allow for dedicated schooling rings for every class and open all-weather rings around the beautiful Fieldstone Show Park for trainers’ and students’ use for the schooling and flatting of their horses.

We will maintain that same discipline in 2016 and will accept only five hundred horses. Please go to our new and greatly improved website and register early: www.silveroakjumpertournament.com.