Kevin Babington Hospitalized and Fighting, In need of our help

Our sport can be a difficult one, no matter how accomplished, no matter how well mounted falls are a part of what we must accept to compete.  I have been close friends with Kevin and Diana for more years than I care to count.  There is nobody more caring, helpful, earnest or kind than Kevin.  A two time winner of the Agero Grand Prix @ Silver Oak, Kevin as everybody knows by now, had a bad fall at the Hampton Classic and is hospitalized in New York.

I want to tell you two short stories emblematic of Kevin and Diana.  Story one, having won the Agero Grand Prix, Kevin took the time to reach out to Agero’s Chairman Sid Wolk and to thank him both in person and in writing later on.  That is a true story of a great ambassador for our sport.  In a like manner he has chatted with our presenting Sponsor Victoria McCullough with no prompting from me it’s just who Kevin is.

Story two, having been stabled next to the Babington’s at a big horse show years back my groom mistakenly loaded Kevin’s horse on the truck to ship home versus my own.  In fact it was Kevin’s Grand Prix horse and due to check in for quarantine for the weekend Grand Prix.  In fairness to the young person in error they were both bays.  Diana called me about a half hour later laughing so hysterically she was choking and informed me of the crisis.  Anybody else would have been angry, perhaps unkind, to Diana and Kevin it was hysterical.  Needless to say we turned the truck around.

Kevin and Diana annually, including this past month, present the leading rider award at the SOJT named after Kevin’s Olympic mount Carling King.  They do it every year with grace and enthusiasm.  This year Kevin got to present to fellow Irish team mate Willie Tynan.  Not a week later Kevin is badly injured and in need of our help.

Checks can now be written to “Babington Family Trust” and 100% of the proceeds will go directly to the family to support Kevin’s care.  Checks should be mailed to PO Box 771, Gwynedd Valley, PA – 19437. Do what you can I know Kevin and Diana would do it for us.  I’ve been in regular touch with Diana, she let me know the outpouring of love was a great help to the family. 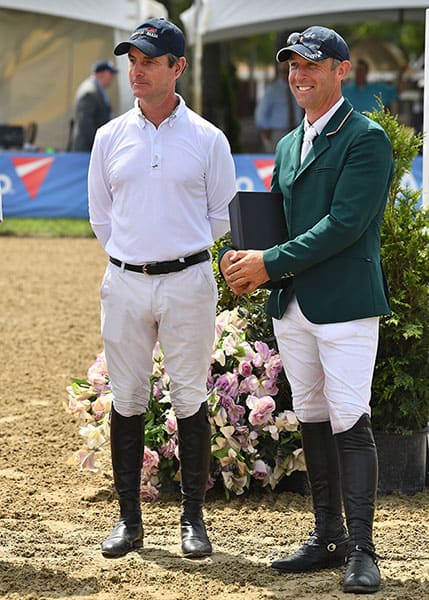