Silver Oak Day Two:  A Trio of Up and Coming Horses Emerge Victorious in the $10,000 Shires Equestrian Welcome Stake

Alan explained his intent for today’s class “I wanted make it a true welcome while still showing certain fences that I’m going to feature in Sunday’s Grand Prix, because there was a mixed bag of competitors here today. There were younger riders who are still trying to move up and then there were some professionals with two or three mounts, and some younger horses in the field. So I was trying to pitch a nice welcome for everyone.”

Eleven combinations negotiated the first round double clear to come back for the short track which was reminiscent of a serpentine, with bending lines culminating in a dramatic line featuring a one-stride, to a galloping seven strides ending over the Shires Equestrian vertical. 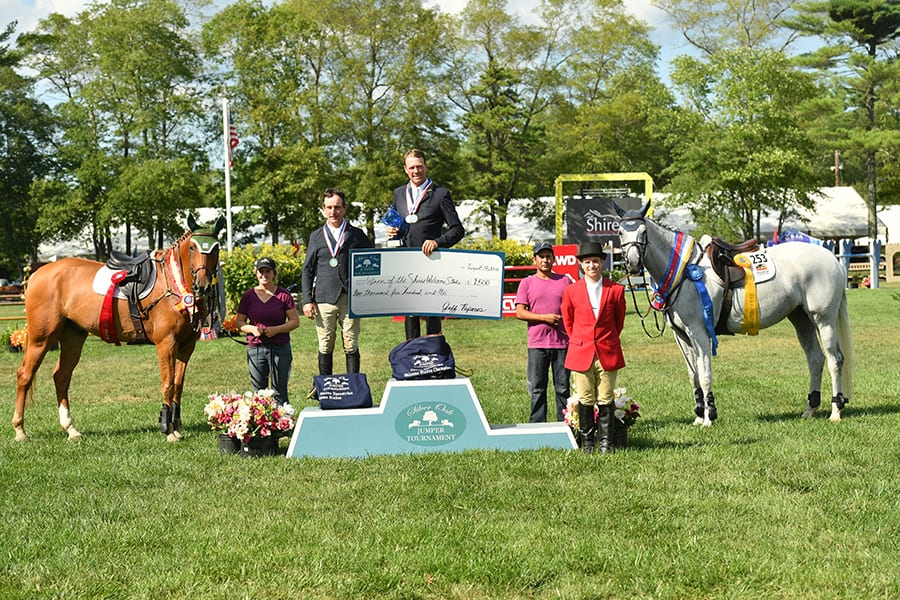 The day ultimately went to Peter Wylde who earned top honors with the 11-year old Dutch Warmblood mare, Aimee, as well as third place with Shakira Z. “We’ve had Aimee for about a year and three months, she’s an incredible horse with an incredible character.  It took us a while to sort of gel, but after Florida, about nine or ten months of having her, things started to come together, and I started to get this feeling ‘Oh wow, she can really jump!’  She did a ranking class at Upperville and she was second. It was like we came together she and I – we understood each other, what we were asking of each other and all of a sudden it was like hand in glove and then it clicked.  Since Upperville she’s just been one great round after another, she’s been super consistent going clear in her last three Grands Prix.”

Wylde explained, “Aimee jumped around this course like it was a training round. As opposed to a year ago this course would have been a struggle. It goes to show that it takes time to develop a relationship with a horse, but if you do, the results really change. So I look forward to every day that I get to ride her and I certainly look forward to showing her because she gives 100%.”

Wylde recognized the quality of today’s course, particularly the great design and footing. “The day that I arrived here and I saw Alan Wade walking around and sussing out the field and I just got a big smile on my face because he is so good. He is arguably one of the top three course builders in the world right now.  Alan has a perfect sense of horsemanship, of the field and the way the horses are going to see it. He always has a fantastic jump off that’s fair and clean, not tricky. His courses are absolutely appropriate to the venue and the horse/rider quality. He can build anywhere in the world. When I learned he’d be here I thought ‘how great for Silver Oak that they got such a famous and brilliant course designer, making this horse show even better than it already is.’”

Wylde is equally excited about his third place mount, 9-year old Zangersheide mare, Shakira Z. “She is an incredible horse.  She’s two years younger than Aimee and she’s much less experienced than Aimee this is a lot for her to come in to a big, impressive ring like this and jump around against a field of Grand Prix horses. She’s been getting better and better this year, we had a fantastic result with her two weeks ago at HITS in the $15,000 Saturday jump off class I made a little mistake at the last jump but she had the time to be the winner. Shakira has really come in to her own, she’s a horse for the future, I’m really happy she had such a great result today.”

After his win Wylde made certain to recognize his staff and owners. “One of the reasons I came back from Europe three years ago was I really missed riding at a higher level and the only way that you can do that is if you have supportive owners. Aimee’s owner, Aram Ampagoumian, is absolutely one of the most supportive owners I’ve ever known – it’s such an honor to ride for him.  Beechwood Stables are incredible owners with a stable of really beautiful horses, all of which are fantastic. They graciously bought Shakira for me to bring up the ranks. Of course the Kamine Family are another incredible owner that have 8 horses with me. At this moment in my career I have the best and most wonderful owners that I’ve ever had and I’m very grateful.”

Kevin Babington and Super Chilled jumped a beautiful double clear round that earned the pair a second place as well as audible cheers from his supporters. He explained a bit of history around his 8-year old Irish Sport Horse who recently moved up to the Grand Prix ranks,  “we bought him as a 6 year-old and left him in Ireland with Greg Broderick. He ended up going to Dublin and winning the 6 year olds there in 2014. Then Greg got picked to be on his first senior Nations Cup team so we brought him over here where he was super consistent as a seven year old – in fact he won the 7 years old here at Silver Oak last year. We just moved him up to the Grand Prix.  He jumped his last grand prix two weeks ago at the $75,000 class at HITS and jumped clear with a time fault. So now I feel that I finally have a Grand Prix horse and I’m super excited about him.

It’s a bit like dé·jà vu watching Kevin and Super Chilled compete. Super Chilled is by Gelvin Clover, who’s a son of Clover Hill. Kevin’s Olympic mount, Carling King, was by Clover Hill.  Kevin is clearly enthusiastic about the horse. “He’s a nephew of Carling King and I’m really excited about him – I think he has a huge future. He’s a big horse, he’s on track if not ahead, but I think he’s just going to keep getting better and better. It took him a while to get connected and get strong.  He’s always been a good jumper with big scope. He wants to leave the jumps up and with age, his connection is getting better. Now it’s starting to come together and he’s very consistent, he jumps a lot of clean rounds.”