MARSHFIELD – With the ground shaking beneath her hooves, EquiFit Zaretta, a Swedish Warmblood horse, sauntered into the ring at Love Light Farm for her daily exercise.

In the saddle sat Zaretta’s partner, Alexandra Cherubini, who will be riding the 1,100-pound equine in the Silver Oak Jumper Tournament in Halifax beginning Wednesday.

“So much is really about the happiness of the horses,” said Cherubini, who lives in Boston. “A rider’s success has to do a lot with the people who deal with [the horses] day to day. We treat them like athletes. They get acupuncture, massages, and go to chiropractors.”

The boutique-style horse show draws competitors and spectators from as far away as Ireland and London.

“We literally have athletes and their horses flying here on 747s from everywhere around the world,” said Jeff Papows, the tourney’s founder, chairman, and CEO. The event, he added, “is just a skip and a jump from Boston.”

With $200,000 in prize money up for grabs, the competing teams won’t be taking the event lightly. The tournament, which has had to turn away 100 horses due to its popularity, will be featuring riders with varying levels of experience and ability, from amateurs to Olympians, through next Sunday.

“It’s a great experience, as far as I’m concerned,” said Kristen Bumpus of Acton. “I like to watch these people who are more successful in the sport than me, so I can see what they do and get better.”

‘We literally have athletes and their horses flying here on 747s from everywhere around the world.’

Bumpus, 44, has come a long way in the world of show jumping. She started when she was 6, falling in love with the sport after attending the Chincoteague Pony Swim. During the event, wild ponies living on an island off the coast of Virginia and Maryland are brought to shore by the local volunteer fire department. They are then shown and sold to those in attendance, with many of their number returned to the island.

“I didn’t have a lot of money as a kid, so I focused on equitation,” she said. “When I got my first horse, we got something inexpensive. We were banking on the fact that it could learn something competitive.”

Happily for Bumpus and her family, the purchase paid dividends. It would lead her ultimately to the Silver Oak tourney, the most critically acclaimed show jumping event the region has to offer, to compete in the presence of Olympians McLain Ward and Peter Leone.

“The scale and magnitude that this event provides is just — it’s great, it’s a six-star show,” said Papows, a rider himself. “Last year, we supported the MSPCA, and we were lucky enough to get some of their animals adopted.”

Continuing on its philanthropic path, the free tournament, now in its third year, will be donating to the BINA Farm Center in Lexington. The center provides equine-assisted activities and therapies to bring together those with and without special needs. It also provides vocational training programs and creative therapies.

“People can donate to BINA at the event,” said Papows. “I’ll tell you, when you meet these people who are struggling and aspiring to these life challenges that have been put in front of them, you can’t not want to help them.”

This year alone, one of the event’s sponsors has donated five horses. Papows said the tourney and the BINA center make for a very natural fit.

Tattie Singer, who manages Watershed Farm LLC, a jumper and equitation farm in Norwell, called it “really exciting to have [the event] right here in Massachusetts, so all the local people can see this great competition.”

Like Cherubini and Bumpus, Singer will be riding during the five-day event. In her 19th year of competition, she’s no stranger to the bond required between horse and rider.

“Having the relax and bond with the horse is fantastic,’’ she said, employing a touch of riding lingo. “The horse that I’m competing with, Elliot, is a young horse. I was the first one to develop him as a baby.’’

As for the competition itself, the event is large scale, offering a wide range of class specifications, awards, and prize money.

On Saturday from 4:30 to 5:30 p.m., there will be an autograph signing attended by all of the show’s Olympians, allowing fans to meet the stars and receive a free copy of “Unbridled Passion,’’ a book about show jumping written by Papows.

Next Sunday, the tournament’s last day, the final award ceremony will be held around 4 p.m.

“We’re all competitive,” said Cherubini. “A lot of things can happen when you’re riding a horse. What makes me happy is if my horse goes well, I ride well. 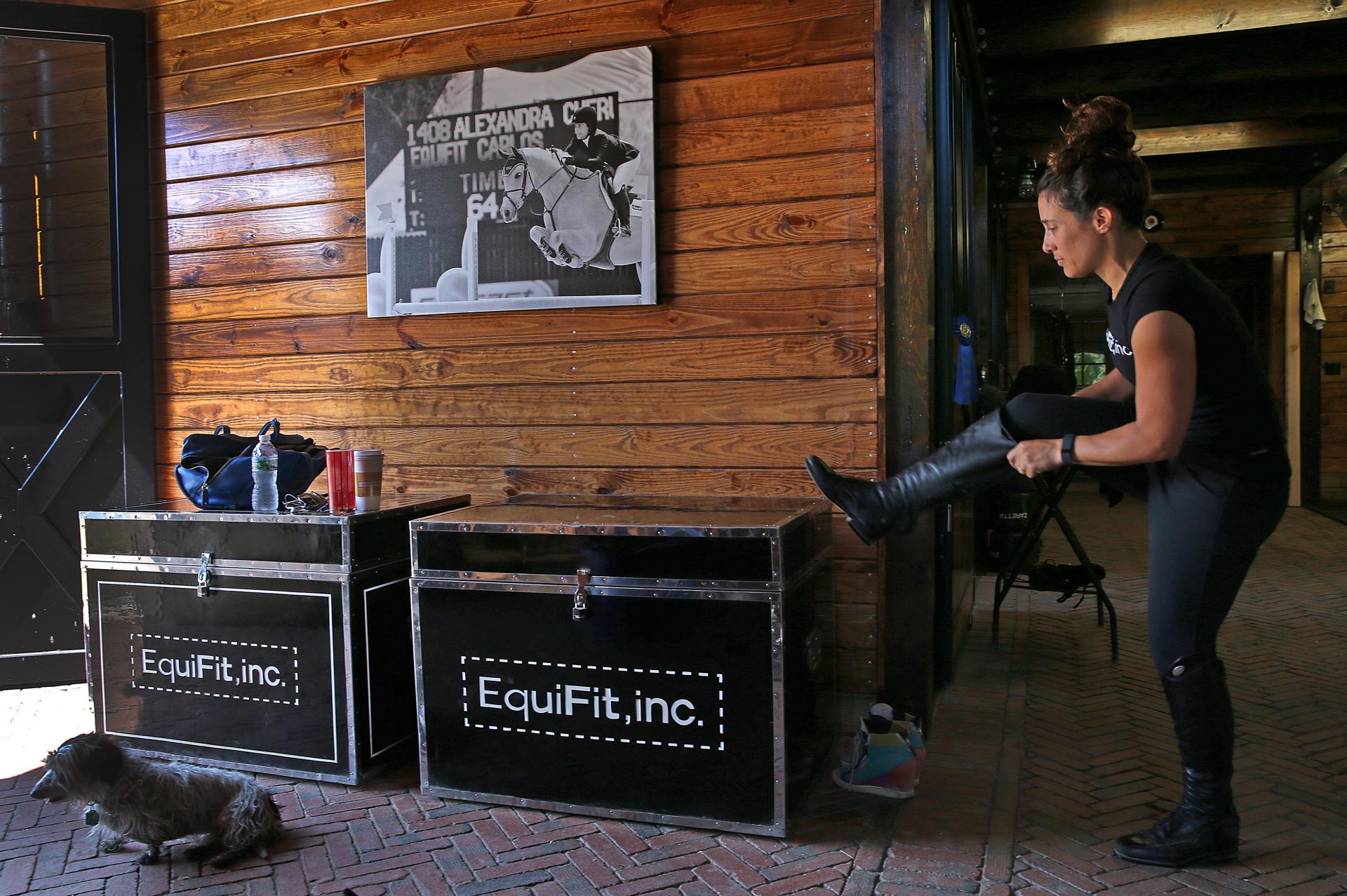 Alexandra Cherubini pulls on her boots while Isa the dog waits to watch at the Love Light Farm in Marshfield.

Notable riders scheduled to compete at the Silver Oak Jumper Tournament in Halifax include:

►Kevin Babington: A native of Tipparary, Ireland, now based in Pennsylvania, the former Olympian is the defending Silver Oak Grand Prix winner, and has 30-plus top 10 finishes in grand prix equestrian events.

►Margie Goldstein-Engel: A 10-time American Grandprix Association Rider of the Year, she competed in the 2000 Olympic Games in Sydney, and won team gold and individual bronze at the 2003 Pan Am Games. She has earned a record $4 million-plus in show jumping.

►Chris Kappler: The New Jersey resident won individual silver at the 2004 Games in Athens, and gold in team jumping along with McLain Ward, Peter Wylde, and Beezie Madden.

►Peter Leone: The owner, along with his wife, Marcella, of Lionshare Farm in Greenwich, Conn., he earned silver at the 1996 Summer Games in Atlanta.

►McLain Ward: This country’s most decorated rider, the 39-year-old McLain has a pair of Olympic gold medals (2004, 2008). At 14, he won the United States Equestrian Federation’s Show Jumping Derby, as well as the equitation medal finals, the youngest to win both titles.

►Paul O’Shea: Originally from Limerick, Ireland, he won the Drammen Grand Prix in Norway, and the 2014 Devon Grand Prix.

►Peter Wylde: The 50-year-old Medfield native won Olympic gold in Athens in 2004 with his US teammates.

Sammy Hurwitz can be reached at sammy.hurwitz@globe.com.